Locust swarms in the Western Cape are diminishing in size and number, but the threat remains 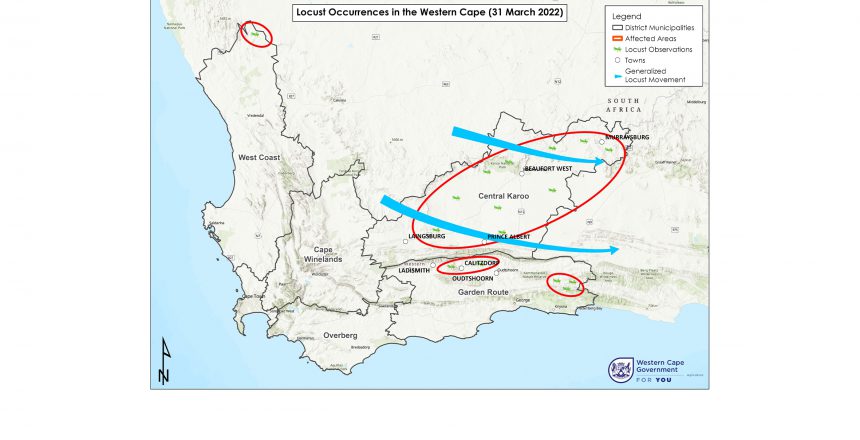 Following my announcement two weeks ago that the Western Cape Government has allocated R5 million rand towards combating the locust infestation in  Central Karoo and Garden Route Districts,   indications confirm that the size and occurrence of locust swarms are decreasing in the Western Cape. The threat of re-occurrence, however, remains.

No further sightings of locust swarms were reported the past week in Laingsburg. In addition, the number and size of swarms in Murraysburg, the Garden Route District and Beaufort West have diminished.

One swarm was sighted in  Prince Albert, while two swarms in Merweville. Another  large swarm, moving in a South Easterly direction,  was spotted 30

kilomteres East of Beaufort West. Hoppers have been sighted in the Kliprand area of the West Coast.

I am thankful to my officials and sector partners, such as organised agriculture, DALRRD, district municipalities, District Locust Officers, and Provincial Disaster Management Centre (PDMC), for taking the necessary steps to mitigate the locust infestation in the Western Cape.

The Western Cape will continue to work with our stakeholders to find a  sustainable solution to protect the agricultural sector in the Western Cape.

We have to prevent an impending disaster. Doing so will protect the agricultural sector and livelihoods. 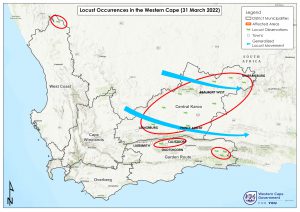